The Mayan Pyramid of the Mighty Kukulkan / Quetzalcoatl

Apology for not posting anything recently. Of course, I was in Mexico for a week. But I've also been sick - and working. I caught a Cold in Mexico (believe it or not). We got trapped in a torrential tropical downpour while on a shopping excursion in Playa Del Carmen. We neglected to bring the umbrella that we saw in our hotel room. An umbrella is a handy tool down here for fending off sun and rain - which can be abundant. Getting soaked was kind of fun really. I wasn't cold at all. But I got a Cold from it anyhow. Not enough to ruin the holiday, but that's where it started. Eventually, on the last day it started to get worse and this was combined with some Heat Stroke - and then food poisoning from a kiosk at the airport. So I was pretty sick on the the 5 hour flight back. After we got to Calgary I got over the Heat Stroke and food poisoning pretty quickly. But the cold has gotten worse and I'm taking a few Cold meds to get by. So I haven't been up to doing much on the blog. Strangely, a couple of years ago, Rose and I both got food poisoning on our last day in Punta Cana, Santa Domingo too. We figure it was from the water we got careless with - brushing our teeth. On that trip it took 14 hours to get home. Sick all the way. In both instances though, the holiday wasn't ruined because it happened at the end. If it had happened at the beginning that would have been a different story. Travelling from Canada to these tropical countries can have these kind of experiences. Combined with a big altitude change you are going from -20 F to 85 F or more. That's over 100 degrees temperature difference. Be forewarned. And be careful.

Anyway, I'll get something up here shortly.

We flew into Phoenix from Calgary ... was an uncomfortable flight. Felt cramped in that seat and had no leg room.

I'm now in the process of switching over to a day shift routine after working 12 hour night shifts for 4 years. I've arrived at the conclusion that night shift work is completely unnatural for human beings - who have been doing the exact opposite for thousands of years. I've read research that states that night shift workers have 70% more health issues than people doing the exact same work in day shift. I believe it. My health deteriorated immediately after I started night shift and I could never adjust to it. I could neve get enough rest and my fitness declined radically. Gradually this effected me emotionally and psychologically - making me depressed and angry. Ultimately I had no choice but to quit. So now I'm in a recovery period. I don't know how long it will take to lose the 60 pounds I gained. Worse yet, the company I worked for offered no pay adjustment or compensation for night work - as many companies do. They don't care about their people.

I'm just glad to be the hell outta there.

So ... today (Friday May 24) I went to the dentist across the border in Algodones, Mexico. I had tried to prepare myself for the 'worse case scenario" - that more work would need to be done and it would take longer that I hoped.

The treatment was very painful ... 2 hours of drilling around the bone where the implants go. I needed extra needles of painkiller. Then I was told that it will require extra work and more time and it still won't be completed. We will have to stay here 3 days instead of 2 and cut our Sedona trip short by another day in order come back here again before we leave. Very disappointing ... and more expensive.

There is little joy.

Yet when I see the tornado disaster on TV, I count my blessings. Sometimes I am just happy to be alive.

Tonight we'll take my swollen and bruised face over to the local theatre and watch the new Star Trek movie. 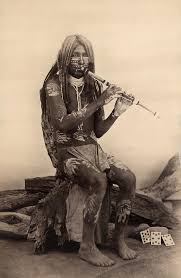 In The Appaloosa Brando ingests a little Pulque (a repulsive sounding brew) in a small Mexican cantina - obviously frequented by Mexican banditos
(aren't they all).
But he smarts his way out of a potential fracus with some nice double talk
... then rides on.

MFW: Pulque - in it's several variations is actually said to have some medicinal qualities - with or without flies.

"Pulque is like beer - it has a low alcohol content, about 4-8%, but also contains vegetable proteins, carbohydrates and vitamins, so it also acts as a nutritional supplement in many communities.
Tequila's predecessor, pulque, was made from as many as six types of agave grown in the Mexican highlands ... Pulque is one of about 30 different alcoholic beverages made from agave in Mexico - many of which are still made regionally, although seldom available commercially. Pulque has remained essential to diet in the central highlands of Mexico since pre-Aztec times."