Music: Original Soundtrack: Do Not Forsake Me – Tex Ritter

” … Considered a landmark of the “adult western,” High Noon won four Academy Awards (including Best Actor for Cooper) and Best Song for the hit, {&”Do Not Forsake Me, O My Darling”} sung by Tex Ritter. The screenplay was written by Carl Foreman, whose blacklisting was temporarily prevented by star Cooper, one of Hollywood’s most virulent anti-Communists. John Wayne, another notable showbiz right-winger and Western hero, was so appalled at the notion that a Western marshal would beg for help in a showdown that he and director Howard Hawks “answered” High Noon with Rio Bravo (1959).
Hal Erickson, Rovi http://movies.msn.com/movies/movie-synopsis/high-noon.2/

“Every five years or so, somebody—somebody of talent and taste, with a full appreciation of legend and a strong trace of poetry in their soul—scoops up a handful of clichés from the vast lore of Western films and turns them into a thrilling and inspiring work of art in this genre. Such a rare and exciting achievement is Stanley Kramer‘s production, “High Noon,” …” “Meaningful in its implications, as well as loaded with interest and suspense, “High Noon” is a western to challenge “Stagecoach” for the all-time championship.”
High Noon,’ a Western of Rare Achievement By BOSLEY CROWTHER – Published: July 25, 1952 http://movies.nytimes.com/movie/22384/High-Noon/overview

Many years after High Noon hit the screens (1953) Lee Van Cleef became a mega star in Spaghetti Westerns. Thus some enterprising Italian designer inserted his image prominently on this poster. In truth High Noon had been Van Cleef’s first movie appearance – and he had no dialogue.

Born Frank James Cooper, (May 7, 1901 – May 13, 1961
– Gary Cooper made over 100 films.
– Cooper received five Academy Award nominations for Best Actor, winning twice for Sergeant York and High Noon.
He also received an Honorary Award in 1961 from the Academy.
– Cooper worked at various odd jobs until getting work as a film Extra in 1925.
– Cooper broke through in a supporting role in the silent film Wings (1927), the first film to win an Academy Award for Best Picture.
– Cooper became a major star with his first sound picture, The Virginian (1929).
– Cooper starred in a total number of 20 westerns, 3 of those were silent.
– Cooper was producer David O. Selznick’s first choice for the role of Rhett Butler in Gone with the Wind. He turned the role down.
–  Cooper was a very close friend with Ernest Hemingway and Pablo Picasso.
–  Ill with an ulcer, Cooper asked John Wayne to accept the Best Actor Academy Award for his performance as Marshal Will Kane in High Noon (1952) on his behalf – a strong bit of irony in light of Wayne’s stated distaste for the film. Wayne accepted.
– In 1966, Cooper was inducted into the Western Performers Hall of Fame at the National Cowboy & Western Heritage Museum in Oklahoma City, Oklahoma.
– Named the #11 Greatest Actor on The 50 Greatest Screen Legends list by the American Film Institute
– He declined roles in The Big Trail (1930), Stagecoach (1939) and Red River (1948).
All of these were subsequently played by John Wayne.
– In 1925 he befriended another young, struggling, would-be actor named Walter Brennan.
Over the years they made 7 movies together.

Some people are special.

The Stars – and a few dozen constellations must have been lined up – and cheering – when Grace Kelly was born.

Her name says it all.

But I wouldn’t say Stardom just fell into Grace Kelly’s lap – she had a dream – and pursued it – even against the will of her parents who looked down on acting. Yet who could have predicted she move from film Stardom become a real Princess – Princess Grace of Monaco. That’s fairy tale stuff. And her destiny was our loss – as she only made a fistfull of movies – High Noon being her only Western. But if you are going to only make one Western why not chose one of the most celebrated Westerns of all time?

“Kane will be a dead man in half an hour and nobody’s gonna do anything about it. And when he dies, this town dies too.”
– Helen Ramirez (Katy Jurado) 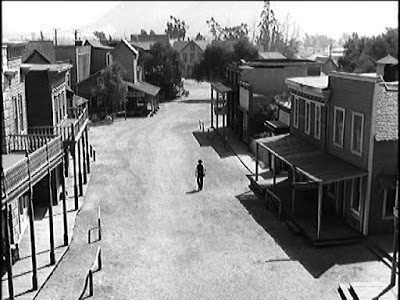 “People gotta talk themselves into law and order before they do anything about it.
Maybe because down deep they don’t care. They just don’t care.”
“The public doesn’t give a damn about integrity.  A town that won’t defend itself deserves no help.”
– Martin (Lon Chaney Jr.)

“It takes more than big broad shoulders to make a man, Harvey, and you have a long way to go.
You know something? I don’t think you will ever make it.” Helen Ramirez (Katy Jurado) to Harvey (Lloyd Bridges)

The pained expression on Kane’s (Gary Cooper) face throughout the film was entirely realistic,
as Cooper had a bleeding ulcer at the time.

High Noon, What Happens: Posted by Brent Allard Wednesday, March 28, 2012  http://criminalmovies.blogspot.ca/2012_03_01_archive.html: John Wayne (a HUAC supporter) called High Noon Un-American for it’s portrayal of the townspeople and Will Kane’s seeking help and throwing the badge in the dirt. He teamed with Howard Hawks (who called Will Kane “unprofessional”) to make Rio Bravo as a response to the film. In Rio Bravo, Wayne plays a Sheriff who with the help of a only a drunk, a kid, and a crippled man, have to prevent a gang from breaking one of their members out of jail. Wayne’s larger than life enthusiasm, is certainly a sharp contrast to Cooper’s haunted Marshal. Though both films are worth viewing, I find it difficult to side with Wayne’s optimism, although it is a pleasant diversion. Certainly to this day we have arguments about HUAC, but the beauty of western morality plays and film in general is that a good story can transcend the specific events that inspired it. High Noon is a parable for any times, including our own current extremely polarized ones. It’s difficult to live your own life, and its easy to find a justification for any moral position you can think of, or find an opinion from someone else, but ultimately the question it asks is whether or not you can live up to your own code, no matter what it costs, even if no one in the world will stand with you.

Dwight Eisenhower, Bill Clinton and George W. Bush all claim High Noon as their favorite movie. Clinton is said to have viewed
High Noon at the Whitehouse 17 times.

The noonday train will bring Frank Miller.
If I’m a man I must be brave
And I must face that deadly killer
Or lie a coward, a craven coward,
Or lie a coward in my grave.

O to be torn ‘twixt love and duty!
S’posin’ I lose my fair-haired beauty!
Look at that big hand move along
Nearin’ high noon.

He made a vow while in State’s Prison,
Vow’d it would be my life or his and
I’m not afraid of death, but O,
What will I do if you leave me?

– “Do Not Forsake Me [The Ballad of High Noon]”, words by Ned Washington, music by Dmitri Tiomkin