Time to toot my horn a bit.

I am the proud recipient of the:

But as I said, with exceptional subject matter like The Lone Ranger and Tonto, how could I fail?

In truth, this is about the 5th Award that kind Bloggers have sent my way, but I've been callously negligent in posting and responding to these expressions of valued appreciation. I hope to rectify this in the near future and post all these kind awards I've received.

In compliance with one condition of the Epically Awesome Award of Epic Awesomeness I am to post 10 epic and/or awesome facts about myself.

I will therefore just re-post my comment from Serendipity Blog.
http://teepee12.com/2013/04/14/epically-awesome-award-of-epic-awesomeness-twice/#comment-13834

"10 epic and/or awesome facts about myself ???
Ah shucks … I can only think of none.
I’ll have a couple of jiggers and make some stuff up.

1. i didn’t graduate from high school. True.
i don’t figure I wuz stoopid. just disinterested.
2. My Dad, myself and my 3 older brothers were all in the Calgary Highlanders.
My Dad fought in the war. The rest of us just fought each other.
3. I have been ‘out of the body’ on several occasions.
Mostly on purpose.
4. I held a broad jump record that lasted 14 years.
5. As a 15-year-old grocery clerk I once gave a customer (who said he was looking for “butterfly nuts”), a box of mothballs. (Hes’ still laughing)
6. I don’t own any guns.
Or a horse.
7. I was once saved from getting hit by a car by an invisible hand that pushed me back onto the curb. I believe in spiritual guardians.
8. i was never sure I was on the right planet. Is this Naboo?
9. I quit drinking, smoking, and drugs.
God I’m bored. (Just kidding … about being bored)
10. I’ve had seven partners.
This last one – Rose – is a keeper.

OK .. Part One of my Duties of Compliance have been completed.

Part Two is Give it to 10 bloggers you think are awesome and/or epic – or both.

Well ... being a reclusive Cowboy, I can't rightly think of 10 offhand, but I'll just start sending them out till the dust settles.

Have a good one.

Periodically we hear the phrase 'The Western is dead".

How could it be with all us Western fans out here?

Fact is, there are Westerns being made all the time. But most of them are minor in nature - not boasting major Stars - and often go directly to video. Many are still worthy of a look and some are actually very good. They just don't get mainstream exposure and distribution. Yet every year there are several we can look out for.

In Theatre's on May 3 comes

Rose and I (and four other folks) took a very bumpy Jeep ride
(hang on to your saddlehorn folks) up Schnebly Hill Road.
(Theodore Carleton (T C) Schnebly and his wife SEDONA Arabella Miller Schnebly
moved to the area in 1901.
Guess how Sedona got it's name?

Eventually we jostled and jerked our way up to a viewpoint near Schnebly Hill Vista ...
then jumped out for a jaunt. Climbing a short, but steep,
little path we arrived at a location overlooking the whole valley.
Beautiful! There are lots of vista shots around Sedona.

Sedona - the view from Schnebly Hill

Here's where Nick - our Jeep driver - points to a certain tree and tells us "This is John Wayne Tree". Really!! (He had no knowledge that I had a blog called My Favorite Westerns). There's a photo (somewhere) of John Wayne posing by this tree when he was filming Angel and the Badman in 1947.
I believe I saw that photo once, but after hours of searching the net was unable to locate it.

Nick claims that Wayne posed somewhat like this (above) in the famous photo.
You know ... I could almost hear Duke whispering in my ear:
"Get yer hand off my tree pilgrim."

Sedona ... see you again in a few months.

(All photos taken by my lady, Rose)

Sedona Diary: The Good, the Bad, and the Agony

The Good: a 3 day spiritual seminar in Minneapolis.

The Bad: 11 hours in a dentist's chair in Algodones, Mexico.

The Agony: 3 days in beautiful Sedona, Arizona ... but I can't eat anything.

Much has changed since I last visited Sedona back in the 70's and early 80's.
Sedona has changed ... a lot ...  but so have I. I'm no longer the youthful hippie who scrambled elegantly over the Red Rock and swam in Oak Creek as the sublime Arizona sun set.
Yet I knew this would be so: This is a different moment. But it's just as good as any previous moment ... and only a fool misses the value of the day by dwelling on the past. It is what it is ... and I count my blessings.
So despite my dental denials I squeezed as much love and joy out of my precious time here as I could.

"Life is hard. It's even harder if you're stupid."
- John Wayne

I figure I'd rather face down the Clantons, the Daltons, and the Waltons ... unarmed ... than sit in dentist chair for even five seconds.

But I just spent 11 hours over 2 days in the dentist office ... and I feel like I've been in several fistfights with John Wayne.

I had teeth pulled, drilled, capped, crowned, implanted, and deep gum cleaning (surgery) ... and a couple of other things. My mouth is full of stitches. Cost me over 7000 bucks ... so far ... and I still have to go back. A couple of actual fistfights with Wayne woulda been cheaper. (But it would have cost me over $20,000 north of the Rio.)

The Clanton Gang ... didn't take care of their teeth

The Walton Gang ... DID take care of their teeth ... but would you want to look like this?

I'm also tantalizingly close to Tombstone and Deadwood ... but I won't be able to get there on this trip. Next time.

My real purpose for being here is to take advantage of the cheap dental services across the border - in Mexico. Where's Doc Holliday when you need him? 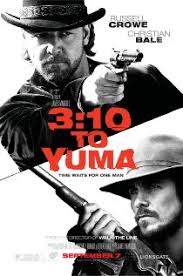 I recall the original 3:10 to Yuma (1957) with Glenn Ford and Van Heflin to be pretty good movie. Ford and Heflin both made several good Westerns. The Russel Crowe and Christian Bales (2007) version of 3:10 to Yuma is pretty good too - but neither will make MFW list. Both are worth a see or two though and I want to give them both another look.

I gotta review Ford's Westerns - he could well ride into my MFW Cowboy Hall of Fame.

Roy Rogers and The Sons of the Pioneers - Tumbling Tumbleweed

"At least 76 feature films, many TV productions and dozens of commercials have been shot either in full or in part in the Greater Sedona area. For three decades, Westerns were the most popular movies in America. From shoot'em-ups to romance, dramas, and the singing cowboy films, they attracted audiences around the world.

The Movie Room in the Sedona Heritage Museum is dedicated to the many hundreds of actors and crew members who have come to Sedona to make their way amidst the scenic grandeur that makes this such a valued destination.

I hope to take a dip in Oak Creek (pictured above) like I did so long ago. Weather and water permitting.

I intend to maintain My Favorite Westerns blog while I'm out there. I'm presently working these projects: Stagecoach, My Darling Clementine and a John Wayne Bio. I like to make at least a couple of postings every week.

Just about anything and everything about Billy the Kid seems to be bizarre, surrounded by questions, lost in lies, or mired in myth.

It is very common - and confusing - to find the famous photo of Billy the Kid reversed - with the rifle on the left side - or the right. Which has caused many people to believe the 'The Kid' was left-handed.

But the confusion is justified:

"It was widely assumed throughout much of the 20th century that Billy the Kid was left-handed. This perception was encouraged by the above mentioned photograph of McCarty (Billy the Kid's real name is not William H. Bonney) , in which he appears to be wearing a gun belt with a holster on his left side, but further examination revealed that as all Winchester Model 1873 rifles were made with the loading gate on the right side of the receiver, the "left-handed" photograph is in fact a mirror image. Indeed, the notion of a left-handed Billy became so entrenched that, in 1958, a film biography of "the Kid" (starring Paul Newman) was titled The Left Handed Gun.

In 1954, western historians James D. Horan and Paul Sann announced the disclosure that McCarty (The Kid) was "right-handed and carried his pistol on his right hip". More recently, in response to a story from The Guardian that used an uncorrected McCarty ferrotype, Clyde Jeavons, a former curator of the National Film and Television Archive, cited their work and added:

You can see by the waistcoat buttons and the belt buckle. This is a common error which has continued to reinforce the myth that Billy the Kid was left-handed. He was not. He was right-handed and carried his gun on his right hip. This particular reproduction error has occurred so often in books and other publications over the years that it has led to the myth that Billy the Kid was left-handed, for which there is no evidence. On the contrary, the evidence (from viewing his photo correctly) is that he was right-handed: he wears his pistol on his right hip with the butt pointing backwards in a conventional right-handed draw position.

A second look at the ferrotype confirms what Jeavons wrote. The prong on the belt buckle points the wrong way, and the buttons on the Kid's vest are on the left side, the side reserved for ladies' blouses. The convention for men's wear is that buttons go down the right side.

Wallis wrote in 2007 that McCarty was ambidextrous. This observation seems to be supported by contemporaneous newspaper accounts reporting that Billy the Kid could shoot handguns "with his left hand as accurately as he does with his right" and that "his aim with a revolver in each hand, shooting simultaneously, is unerring."

Thus - typically for 'the Kid' - both photos are legitimate.

The amount of strange myths, legends and disinformation surrounding Billy the Kid would fill several books. And 23 movies.

Billy the Kid by Woody Guthrie