A Western actor’s dream – a scene – and a drink with the Duke.

The Comancheros – The Duke

The Comancheros – The End

A Western actor's dream - a scene - and a drink with the Duke.

The Comancheros - The Duke

The Comancheros - The End

Marvin at center - Chandler at right

The Stranger Wore a Gun (1953) Marvin and Borgnine

The Stranger Wore a Gun is a muddled mess made palatable by Scott's likeable hero, a strong supporting cast, and the novelty of 3-D at its most nakedly exploitive.

Lee moves up to 4th on the Bill

Fregonese’s fact based US Civil War film, chronicling a confederate soldier’s infiltration of a small town in Vermont as he prepares to sack it, complicated by his meeting of an attractive young widow, is, with its excellent performances and uncompromising scripting, a thrilling yet intelligent examination of the ambiguities of war and human relationships.

MFW: about the only thing I liked about Gun Fury was that is was filmed around Sedona, Arizona - one of my favorite places on the planet.

Lee is 5th on the Bill

"You have to dream, you have to have a vision, and you have to set a goal for yourself that might even scare you a little because sometimes that seems far beyond your reach."

Peck was nominated for five Academy Awards, winning once. He won the Academy Award for Best Actor for his role as Atticus Finch in the 1962 film To Kill a Mockingbird.
In 1968 he received the Academy's Jean Hersholt Humanitarian Award.
Peck also received many Golden Globe awards. He won in 1947 for The Yearling, in 1963 for To Kill a Mockingbird, and in 1999 for the TV mini series Moby Dick.
He was nominated in 1978 for The Boys from Brazil.
He received the Cecil B. DeMille Award in 1969, and was given the Henrietta Award in 1951 and 1955 for World Film Favorite – Male.
In 1969 US President Lyndon Johnson honored Peck with the Presidential Medal of Freedom, the nation's highest civilian honor.
In 1971 the Screen Actors Guild presented Peck with the SAG Life Achievement Award.
In 1989 the American Film Institute gave Peck the AFI Life Achievement Award.
He received the Crystal Globe award for outstanding artistic contribution to world cinema in 1996.
In 1986 Peck was honored alongside actress Gene Tierney with the first Donostia Lifetime Achievement Award at the San Sebastian Film Festival Spain for their body of work.
In 1987, Peck was awarded the George Eastman Award, given by George Eastman House for distinguished contribution to the art of film.
In 1993, Peck was awarded with an Honorary Golden Bear at the 43rd Berlin International Film Festival.
In 1998 he was awarded the National Medal of Arts.
In 2000 Peck was made a Doctor of Letters by the National University of Ireland.
He was a founding patron of the University College Dublin School of Film, where he persuaded Martin Scorsese to become an honorary patron.
Peck was also chairman of the American Cancer Society for a short time.
For his contribution to the motion picture industry, Gregory Peck has a star on the Hollywood Walk of Fame at 6100 Hollywood Blvd.
On April 28, 2011, a ceremony was held in Beverly Hills, California celebrating the first day of issue of a U.S. postage stamp commemorating Peck. The stamp is the 17th commemorative stamp in the Legends of Hollywood series.

"There's some things a man has to prove to himself alone... not to anyone else."
Gregory Peck / The Big Country

"In Westerns you were permitted to kiss your horse,
but never your girl."

Voted best film of the year 1971
by Films and Filming Magazine.

Some actors seem born to be in Westerns ...

... including Buffalo Girls (1995) in which he played Wild Bill Hickok. In 1998, Elliot was named the Grand Marshal of the Calgary Stampede parade and rode in the procession before 300,000 spectators. He has also starred in Road House (1989) with Patrick Swayze and played Virgil Earp in Tombstone (1993), which starred Kurt Russell and Val Kilmer.

"I`ve spent my entire career on horseback or on a motorcycle."

In researching Westerns ... I'm finding I have some 'dues' to pay. I've discovered my education in Western movies is sadly lacking and there are a ton of Westerns out there that I have never seen that I need to 'catch up on' - even at this late date.

In doing so I've also found that I sometimes have to subject myself to a few Westerns that are less than excellent. Like tonight, when I decided to watch The Shadow Riders with Tom Selleck. Tom Selleck is a favorite actor of mine and, in fact, is in one of My Favorite Westerns: Quigley Down Under. But The Shadow Riders is (sadly) not of the same calibre. It's a TV Movie - a B Movie. Not that all TV Movies or B Movies are poor - some are pretty good and a lot of fun to watch - they just aren't normally 'top of the line' in production qualities. 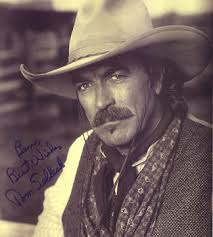 The Shadow Riders actually has some pretty fine talent in - besides Selleck:  Sam Eliott, Ben Johnson; Catherine Ross ... plus a sampling of trusty support actors. But it's not a good movie.

With regard to Ben Johnson: a fine Western actor who has appeared in MANY Westerns - and is also in another of my My Favorite Westerns: The Wild Bunch. He's one of the four (anti) heroes who march to the final showdown - along with William Holden, Ernest Borgnine, and Warren Oates.

Ben Johnson definitely has a place in the MFW Cowboy Hall of Fame ...

"The general consensus seems to be that I don't act at all."

"Hopalong Cassidy and Ben Johnson have rubbed off on my life. That's about all I have to say."

As a kid watching High Noon, it never dawned on me that there was anything going on 'behind the scenes'. Lost in the wonder of an epic and heroic tale, I didn't see it's (and many Westerns) very strong social and political messages:

High Noon, What Happens: Posted by Brent Allard Wednesday, March 28, 2012  http://criminalmovies.blogspot.ca/2012_03_01_archive.html:
"John Wayne (a HUAC supporter - House Un-American Activities Committee) called High Noon Un-American for it's portrayal of the townspeople and Will Kane's seeking help and throwing the badge in the dirt. He teamed with Howard Hawks (who called Will Kane "unprofessional") to make Rio Bravo as a response to the film. In Rio Bravo, Wayne plays a Sheriff who with the help of a only a drunk, a kid, and a crippled man, have to prevent a gang from breaking one of their members out of jail. Wayne's larger than life enthusiasm, is certainly a sharp contrast to Cooper's haunted Marshal. Though both films are worth viewing, I find it difficult to side with Wayne's optimism, although it is a pleasant diversion. Certainly to this day we have arguments about HUAC, but the beauty of western morality plays and film in general is that a good story can transcend the specific events that inspired it. High Noon is a parable for any times, including our own current extremely polarized ones. It's difficult to live your own life, and its easy to find a justification for any moral position you can think of, or find an opinion from someone else, but ultimately the question it asks is whether or not you can live up to your own code, no matter what it costs, even if no one in the world will stand with you."

"...No matter what perspective one takes, there's no doubt that High Noon deals with such issues as civic responsibility, active involvement in social causes, and heroic behavior during crises–all problems loaded with political overtones in the early 1950s.  Its cynical commentary on the masses' fear of involvement in controversial issues proved to be prophetic during McCarthy's political witch hunting.  Arguing that people should have nothing but contempt for the cowardice of ordinary folks, the film also spoke for the necessity of joint action, if enemies are to be defeated ... "

MFW: I admit that I am not a John Wayne fan. I acknowledge his undeniable onscreen charisma and that he is among the greatest movie stars of all time. I also acknowledge that he made some important and iconic Westerns. Yet I disliked him as a person and disrespected his politics. I found his 'over the top' super patriotism and 'my country right or wrong' flag waving to be very distasteful - and dangerous. I also disrespected that he refused to fight in WWII - then became a super patriot out of guilt (as one of his former wives stated). Further, Rio Bravo's response to High Noon (by Wayne and Hawkes) is very weak. It's 'a John Wayne movie'. As a Western it has it's moments - and a great cast (Wayne, Brennan, Martin, Nelson ...) but as a political statement it's pure hokum. It will not make My Favorite Westerns.

YET ... as noted, if we can throw politics to the side, it's interesting that both films still stand up and are obviously enjoyed without any political notions whatsoever.